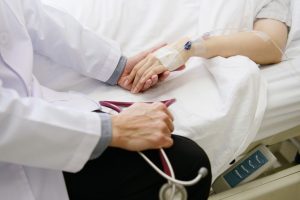 Words are among our best tools in establishing empathy between doctor and patient. Shakespeare used words for their explicit and multiple meanings, knowing that specific connotations could determine courses of action. As an anesthesia specialist, the choice of words can be most critical. They can convey hope or despair, progress or inertia, life or death.

In a health care world under the control of administrators, robots, frustrating receptionists, designated hours, prescribed patient management and loss of physician independence, the doctor (not employee) is left in control only of the few moments allowed for patient interaction. These are the few moments for empathy. Only by empathy for the patient does the physician warrant the patient’s trust in return, and the designation of being – a healer.

Several hundred years ago, physicians spoke in Latin to each other to discuss a case secretly and in order to have patients admire them for their wisdom. Certain words for incurable afflictions of the time were spoken only to close relatives or persons of authority, but hidden from the patient. In the last century, and in some circles even today, the diagnosis of cancer is kept from the patient.

The way in which information about anesthesia risks of treatments is communicated to patients can have a significant effect on their perceptions and decision making.

“Surgeons must frequently communicate the probability of various treatment outcomes, complications and chances of cure to their patients to help them make health care decisions,” said Joshua Eli Rosen, MD, of the Surgical Outcomes Research Center at the University of Washington, in Seattle. “Prior studies have shown that how probability information is communicated can impact its interpretation and ultimately decisions that are made with it.”

Yet, despite these concerns, no standard practice exists for how surgeons should communicate such information to their patients.

An online survey was conducted that queried respondents where risk information was presented either verbally (i.e., “uncommon”), as quantitative point estimates (i.e., 3%), or via quantitative ranges (i.e., 1%-5%). Verbal risk communications were found to result in significantly higher ranges of risk estimates for each surveyed complication, and were found to consistently lead to overestimation of risk.

“However,” Dr. Rosen added, “we must recognize that by addressing these concerns with verbal descriptors alone, we are simply passing that uncertainty and variability to the patient in an uncontrollable way that may result in suboptimal decision making.”

Although verbal descriptors of probability resulted in greatly variable and inaccurate interpretations of risk, participants were able to accurately interpret numerical point estimates and ranges.

Mary E. Knatterud, PhD, has written extensively on the impact of language in medical practice. A word Knatterud greatly dislikes is “elderly.” “Elder” means a person advanced in age, and has, in the past, been a sign of respect. “Elderly” has become almost the opposite of “elder,” implying infirmity of body and/or mind. Other dictionary synonyms for elderly are neither favorable nor laudatory; they imply that the elderly are no longer in the vigorous fullness of life and that somehow this is a transgression warranting a loss of respect.

We know that age is not irrelevant in medical and surgical practice. A person’s age may be a critical factor in determining a diagnosis or therapy.

Patients are to be cared for as fellow sentient humans, with dignity and compassion, with respect, courtesy and regard, with the empathy they are entitled to by their offer of faith in us, their physicians.

Two of the darkest words in the medical lexicon are “terminal” and “incurable.” A physician, a person of knowledge, who speaks those words to a patient is pronouncing a death sentence. Though we must at times make that pronouncement, we must do so with the greatest compassion, recognizing that life per se is terminal and that someday all of us will face the pronouncement of terminality.

Incurable is less an expression of knowledge, than an apology for helplessness. If we must tell a patient that his illness is incurable, we need to add the word “today.” We can recite to the patient diseases that were once incurable but that today are not.

Often, the most important words spoken to patients take place in the examining room in an atmosphere that should be imbued with courtesy toward the patient. A smile, a post-COVID handshake or a touch of the shoulder, and certainly greeting a patient by name, should start an interaction with a patient. Talking to the patient is ever so preferable to talking about the patient to associates in the room.

The doctor–patient relationship is a unique bond whose tone and boundaries the doctor establishes. Choosing the right words matters.